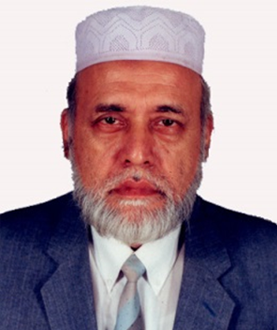 Prof. Dr. Alee Murtuza is a distinguished alumnus and former faculty of the Department of Civil Engineering who became the 9th Vice-Chancellor of BUET in 2002. He was born to Late Mrs. Zakia Khatun and Late Mr. Md. Sulaiman on 29th Dec. 1944.

Prof. Murtuza completed his matriculation in 1959 and intermediate education in 1961. He earned his bachelor’s degree in Civil Engineering from BUET in 1965. After graduating, he started his professional career with EPIDC where he worked about a year. In 1966, he joined the famous international consulting firm Louis Berger & CE (Pak.) where he worked as a designer of several bridges and other structures.  In 1970, he joined Rahman and Associates as a senior engineer and was involved in designing of high-rise buildings and bridges in Dhaka and other places of Bangladesh. With these excellent experiences as a professional civil engineer, he joined Department of Civil Engineering, BUET as an Assistant Professor in 1973. He earned his master’s degree in civil engineering from BUET in 1976. The topic of his MSc thesis was Effect of Torsion, Bending and Shear on Rectangular Concrete Beam of Brick Aggregate. He became associate professor in 1977. In 1978, he went to the UK on a Commonwealth Scholarship and earned his PhD from the University of Liverpool in 1982. The topic of his PhD thesis was Analytical and Experimental Investigation of Spine Beam Bridge Deck. He became full professor in 1983.

As an academician, Prof. Murtuza developed himself as a specialist bridge engineer and was engaged in various research activities. The topics of his research included behavior of grid floors, box beam bridges, analytical and experimental investigation of bridges with skewed deck and curved deck, effect of thermal loading on buildings, building demolition methodology etc. These researches resulted in publication of a number of technical papers in international as well as local journals, which now stand as a source of excellent references to current researchers and students.

Apart from his academic and research activities, Prof. Murtuza also served in many administrative positions. He was the Head of the Department of Civil Engineering in 1987 – 89, Dean of the faculty of Civil Engineering in 1990-92 and Director of Computer Center in 1995-1997 etc. He was appointed by the govt. of Bangladesh as the chairman or member of many committees and bodies outside BUET. He served as a member of the Syndicate of Khulna University, Senate of Jahangir Nagar University, National Education Commission, National Higher Education Commission, Committee for Modification of Private University Act 2006 etc. His administrative achievements culminated when he became the Vice-Chancellor of BUET in 2002 where he served till 2006. He retired from BUET in 2009.

As an expert civil engineering consultant, Prof. Murtuza had been engaged in various projects in the capacity of team leader or member. Bangladesh govt. appointed him as the Chairman of the Govt. Review Committee on Cost and Design of Jatrabari- Gulistan Flyover in 2006. He was also a member of the Govt. Committee for Investigation of Crack in Jamuna Multipurpose Bridge in 2006. As and expert structural designer he contributed in various other projects such as the Dharala Bridge in Kurigram, Kanchan Bridge in Dhaka, design of Noakhali University of Science and Technology and many more.