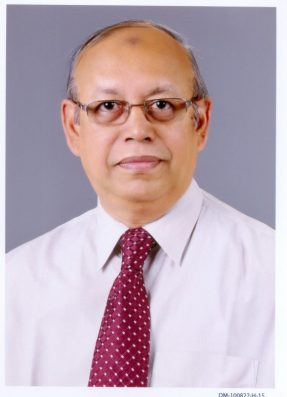 Professor Abul Mukarram Mohammad Safiullah is a distinguished alumnus of the Department of Civil Engineering, BUET and an expert in Geotechnical Engineering who became the 10th Vice-Chancellor of BUET in August 2006.

Dr. Safiullah was born on 17th August, 1947 in the Kishoreganj District. He completed his SSC and HSC education from Faujdarhat Cadet College in 1963 and 1965 respectively. He earned his bachelor’s and master’s degree in Civil Engineering from BUET in 1969 and 1977 respectively. The topic of his master’s thesis was Causes of Failure of Embankments : Dacca-Narayanganj-Demra Embankments – A Case Study. He went to the UK on a Commonwealth Scholarship and earned his PhD from the University of Strathclyde in 1981. The topic of his PhD thesis was Aspects of Engineering Behaviour of Compacted Clays Related to their Pore Size Distribution and Fabric. After earning his bachelor’s degree, Dr. Safiullah worked in a local Consulting Engineering firm and then joined the Design Directorate of the Water Development Board in 1971. He joined the BUET as a Lecturer in the Department of Civil Engineering in 1973 and later became a Professor in 1984.

During his long carrier in BUET spanning four decades, he served as the Head of the Department (1993), Dean of the Faculty of Civil Engineering (1998), Director of Planning and Development (1989), Project Manager of University of Alberta-BUET Institutional Linkage Project (1989) that lead to establishment of Petroleum and Mineral Resources Engineering Department, and Directorate of Continuing Education at BUET. He was appointed by the govt. as the chairman or member of many committees or bodies to help govt. in policy making decisions. Currently he is serving as the Vice-Chairman of  the Board of Accreditation for Engineering & Technical Education, IEB. Previously, he served as a member of Bangladesh Professional Engineers’ Registration Board, Bangladesh Hokey Federation etc. Prof. Safiullah had also involved in various activities of the University Grants Commission (UGC) in capacities such as Member of UGC Award Committee, Equivalence Committee, Higher Education Quality Enhancement Project (HEQEP), and Accreditation for Higher Education. His career in BUET culminated when he became the 10th Vice-Chancellor of BUET in 2006 and was in the chair till 2010. As Vice Chancellor of BUET he had been deeply involved in designing and developing academic and research facilities in BUET to build it into a premier engineering education center and a center of excellence. After his retirement from BUET in 2011, he joined Ahsanullah University of Science and Technology (AUST), Dhaka as its Vice-Chancellor.

As an academician and researcher, Prof. Safiullah has significantly contributed to the development of Geotechnical Engineering in Bangladesh through his research and teaching and also through numerous lectures to local engineering organizations. He has authored a large number of technical papers in national and international journals and conference proceedings related to geotechnical engineering, soil characterization, ground improvement, embankments, and earth structures. He is one of the authors of foundation chapter of the Bangladesh National Building Code (BNBC, 1993) and Design Manual for Road Structures prepared for Local Government Engineering Department.

As a leader in engineering professional activities Prof. Safiullah fully participated in institution building activities of the IEB. He is a Fellow of the Institution of Engineers (Bangladesh), a former Council Member, and was the Chairman of the Civil Engineering Division for three terms. He is also a life member of the American Society of Civil Engineers. He was instrumental in founding the Bangladesh Society for Geotechnical Engineering in 1989 which is a chapter of the International Society for Soil Mechanics and Geotechnical Engineering (ISSMGE). Currently he is the President of this Society. He had been involved in two international technical committees of the ISSMGE, TC-33 (On Scour of Foundations) and TC-20 (On Engineering Practice). He is a former Member of the Bangladesh National Nuclear Safety Committee.

As an expert civil and geotechnical engineering consultant, Prof. Safiullah had been engaged in various projects in the capacity of a member or team leader. He was consultant to a large number of projects of national interest related to transmission towers, stadiums, ports and jetties, roads on soft ground, and major bridge projects. He was a Member of Panel of Experts for the Bangabandhu (Jamuna) Bridge, team of experts (geotechnical specialist) for the Multipurpose Cyclone Shelter Programme that prepared a Master Plan for Cyclone Shelters in the coastal areas of Bangladesh, East-West Electrical Interconnector Project, etc. Currently he is working as a Member of the International Panel of Experts (PoE) for the Padma Multipurpose Bridge advising the govt. on foundation and geotechnical engineering issues.

In recognition to his service to the engineering community of Bangladesh, academic excellence and valuable contribution in enhancing the quality of engineering education, Prof. Safiullah was awarded the IEB Gold Medal in 2015.