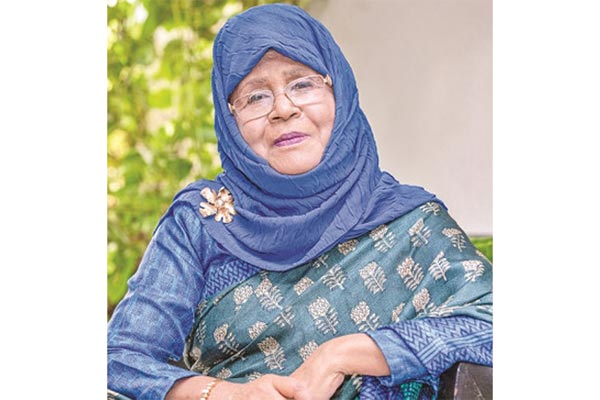 Khaleda Shahriar Kabir (Dora) is one of the first female engineers and civil engineers in Bangladesh. She was born on 8th November 1946 in the district of Gaibandha. She did her Matriculation (SSC) from Muslim Girls School in 1962 and Intermediate (HSC) in 1964 from Eden College. She completed her Bachelor’s degree in Civil Engineering from BUET (then East Pakistan University of Engineering and Technology, EPUET) in 1968 (first class). She earned her Master’s degree in Water Resource Engineering from the Asian Institute of Technology (AIT), Thailand in 1975.

The journey of Khaleda Shahriar Kabir (Dora) to become the first female civil engineer in Bangladesh was not smooth. After the completion of HSC, Khaleda Shahriar Kabir (Dora) along with Manowara Begum and Shirin Sultana (Chumki) decided to study engineering at the most prominent engineering school of East Pakistan – the EPUET. However, the EPUET authority, in fear of conservative society’s backlash, was strictly against admitting women to the university especially to the Civil Engineering department which required extensive amount of fieldwork and month-long residential semester away from home to conduct surveys. After the trio’s endurance and determination, the EPUET authority allowed them to take the entrance examination in one condition that the three women would not be allowed to study Civil Engineering.

After the completion of her first year as an engineering student, Khaleda Shahriar Kabir (Dora) choose Electrical Engineering as her discipline in second year. However, she was not enjoying the subject at all. Hailing from a civil engineering family, Dora’s lifelong dream was to become a Civil Engineer. The brave-hearted duo, Khaleda Shahriar Kabir (Dora) and Shirin Sultana (Chumki), decided to go to the administration again and demanded the reasons that disqualified them from studying Civil Engineering.  BUET authority told that the fieldwork and the month-long residential semester at Savar to conduct surveys would require their parents’ permissions, Both Dora and Chumki’s family permitted them to attend the semester away from home without question, and they were finally allowed to study Civil Engineering. After their graduation, on 14 December 1968, the Morning Sun wrote:

“Another new career for the women of Pakistan has been pioneered by East Pakistani girls, and once again they are from the East Pakistan University of Engineering and Technology. Out of over 113 students who graduated from the Department of Civil Engineering this year, two of them are girls – the first engineers of the province and the first of their kind in Pakistan.”

Khaleda Shahriar Kabir (Dora) started her engineering career in an engineering consulting firm “Mokbular Rahman and Associates” in 1969. In 1970, she joined in East Pakistan Water and Power Development Authority (EWAPDA), now Bangladesh Water Development Board (BWDB), as an Assistant Engineer. At that time, she was the first female engineer from East Pakistan appointed by the Pakistan Government. In 1975, when she earned her Master’s degree, she became the first female student from Bangladesh to achieve a postgraduate degree in engineering.

Through her qualifications, skills, intellect and hard work, Khaleda Shahriar Kabir (Dora) gradually promoted to Executive Engineer in 1978, Superintending Engineer in 1994 and Chief Engineer in 2000 at BWDB.  She took the charge of Additional Director General (ADG O&M) in 2002 and retired from BWDB in 2004. She was the first female engineer in Bangladesh who could achieve such a high position in a Government Organization.

Khaleda Shahriar Kabir (Dora) was involved in many important projects in Bangladesh. She was one of the chief designers of the 615 m Teesta Barrage Project in North Bengal (the biggest water resource project in Bangladesh at that time). She was also involved in the design and implementation of the Dhaka Integrated Flood Protection Project, Buriganga Right Bank Project, Kurigram Flood Control and Irrigation Project, Cholonbil project, Koitla Floor Control project and many more.

Khaleda Shahriar Kabir (Dora) was a natural leader. She served as the president of the Bangladesh Water and Electricity Engineering Association. She worked hard to ensure rights and to implement fair policies for the engineers at their workplace. After retirement, she worked as a president of the Retired Engineers Association (REA) in BWDB. She was active in different organisations to eliminate gender discrimination and ensure the proper working environment for female engineers. She was also involved in many clubs and social activities. She received many awards for her contributions at the workplace and to society – Dr. Z H Bhuiyan Foundation Science Award, Lions Club Distinguished Service Award, Women Architects, Engineers, Planners Association (WAEPA) Award, BUET Alumni Award, Awards by Institute of Engineers Bangladesh (IEB),  BWDB – to name a few.

Khaleda Shahriar Kabir (Dora) passed away on 20 January 2021. She is the pioneer of women in engineering in Bangladesh. Her powerful story of determination, perseverance, confidence and success, inspired and still inspiring many women to study engineering, especially civil engineering.