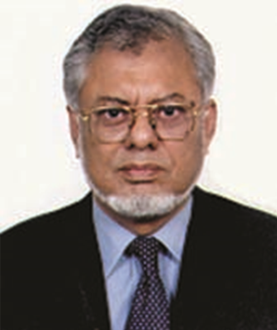 Engr. Quamrul Islam Siddique is a prominent alumnus of the Department of Civil Engineering who is a freedom fighter, leader and a modern architect of rural infrastructure development in Bangladesh. He played the leading role in establishing of Local Government Engineering Department (LGED) in its present form.

Engr. Siddique was born to Mrs. Begum Hamida Siddique and Mr. Nurul Islam Siddique on 20th January 1945 in Kushtia. He received his primary and secondary education in Kushtia. He graduated from the Department of Civil Engineering, BUET in 1966. He started his professional career in 1967 as Asst. Engineer in the Works Programme of the Govt. in Kushtia. When the liberation war of Bangladesh broke out in 1971, he joined the war as a freedom fighter.  As an engineer he actively co-operated in the war by making designs of many road and bridges to help the freedom fighters. After the independence of Bangladesh, he continued his professional career with the Public Works Department. In 1976, we went to the UK to pursue master’s. He earned his master’s degree on town and regional planning from the University of Sheffield in 1997. Upon returning from the UK, he served as the Deputy Chief Engineer of Rural Works Programme and later as the Superintending Engineer of Urban Works Programme under The Ministry of Local Government, Rural Development and Co operatives during the period of 1977-1985. Then he served as the Engineering Adviser to the Local Government Engineering Bureau (LGEB) till 1992. He became the chief engineer of LGED when it was founded in 1992 by upgrading the LGEB. He served LGED till 1999. Later he also served in many top tier govt. administrative positions such as Chairman of the Bangladesh Power Development Board (1999-2000), secretary of Jamuna Bridge Division, Ministry of Communication (2000), secretary of Ministry of Housing and Public Works (2000-2001), Chairman of the Privatization Commission at the Prime Minister’s Office (2001), Executive Director of Dhaka Transport Coordination Board (2002-2004) etc. After retiring from govt. job, he continued as the leading organizer in many national and international organizations such as Chairperson of GWP-South Asia- Regional Water Partnership, President of Bangladesh Forum for Municipal and Urban Development, President of Bangladesh Water Partnership.

Though Engr. Siddique served as a secretary of the govt. which is the top-tier govt. service position, his most significant achievement as an engineering professional is the establishment of LGED. Before LGED was established in 1992, he served as an engineering official for more than 25 years at many positions. In these jobs, he was responsible for planning, programming and supervision of rural and urban public works implemented by the municipalities and local bodies throughout Bangladesh, preparation of project proposals for Urban Works Programme and implementing rural and urban infrastructure development programme throughout the country. During this time, he diligently worked for rural infrastructure development which made him a role model of infrastructure development. His dynamic leadership and visionary administration during this time resulted in the enhancement and upgradation of LGEB which ultimately established the LGED, where Engr. Siddique joined as the founder chief engineer. He single-handedly developed LGED as an organization, which was the first government office in Bangladesh to use computer and LAN systems. To increase food productivity, he brought the Ruber Dam technology by which farmers can reserve water to cultivate IRRI in dry season. He took revolutionary step to establish Geographical Information System (GIS) to design base map of district, upazilla and unions of Bangladesh. He led and completed many projects with the assistance of the World Bank, Asian Development Bank, JBIC, KFW, Saudi Development Fund and OPEC Fund. Various development works were undertaken at his initiative  with the assistance of JICA, USAID, SIDA, SDC, DANIDA, NORAD and UNDP. In his career spanning over four decades, he attended many seminar and meeting and applied those experiences and knowledge, in infrastructure development of this country.

Engr. Siddique was very active in promotion and advancement of the engineering community of Bangladesh. He was instrumental in establishing Bangladesh Professional Engineers Registration Board(BPERB) of IEB in 2001 that awards P.Engg certification to professional and experienced engineers. And Engr. Siddique was the first to receive the P.Engg certification from BPREB. Owing to his dynamic leadership, he was immensely popular in the engineering community of Bangladesh. He was elected the President of the Institution of Engineers, Bangladesh (IEB) for the period 2002-2003.

Engr. Quamrul Islam Siddique died of cardiac failure on 1st Sept. 2008 at the age of 63. His untimely demise marked the end of an era that saw how an engineer can rise more than his professional obligations and contribute to the benefit of the society through leadership, honesty, innovation and patriotism.