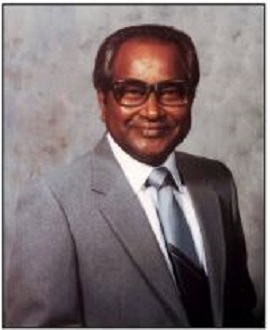 Professor Dr. Abul Hasnat was born on December 22, 1926 in Rangpur, Bangladesh. He was the fourth of 12 children raised by very inspiring and disciplined parents, Khan Shaheb Bashiruddin and Meherunessa Begum.

As a young man, Abul Hasnat completed his intermediate examination in science group in 1942 from the prestigious and highly exclusive Presidency College in Kolkata, India and then went on to receive his Bachelor’s Degree in Engineering in 1946 from Shibpur Engineering College, Calcutta University, West Bengal, India. He worked at the Patent Office in Calcutta and then received an Indian Government Scholarship to study at Carnegie Institute of Technology (currently Carnegie Mellon), Pittsburg, Pennsylvania, USA. He completed his Master’s degree specializing in Civil Engineering from Carnegie in 1950. After his Masters, he worked as a Design Engineer at D.B. Steinman & Associates Consulting Firm, a prominent engineering firm in New York City where he did the preliminary design for the Mackinac Bridge (Big Mac) in Michigan, among other bridges across the USA and in East Pakistan/Bangladesh. In 1965, he received his Ph.D. in Civil Engineering from Texas A&M University, College Station, Texas, USA.

Dr. Hasnat was one of the most outstanding, upright and revered professors of BUET. His extraordinary contribution in steering engineering education in Bangladesh will be remembered, recognized and respected forever. Dr. Hasnat was a pioneer and equally successful as a world-famous bridge engineer and designer. He designed numerous bridges in the 1950s and 1960s both in the US and Bangladesh. Some of his prominent work was the Mackinac Bridge (Big Mac) in Michigan which is currently the 5th largest suspension bridge in the world and the longest suspension bridge in the western hemisphere. This bridge is featured on the Michigan License Plate as well as commemorative postal stamps. In Bangladesh, Dr. Hasnat designed the Dhaleswari Bridge (near Manikganj), the Tora Bridge (Dhaka-Aricha Highway) and the Shangu Bridge, connecting Chittagong and Cox’s Bazar districts.

Dr. Abul Hasnat was a larger-than-life person, ever polite, humble and down-to-earth throughout his life. He had been a teacher, mentor and leader to many people, who have been touched by him. He possessed the ability to become friendly with colleagues and friends from all age groups. He used to take a lot of interest in sports, particularly cricket. He was a regular bridge player in the Teachers Club at BUET. He was the Table Tennis Champion in Bangladesh for people over 40 years of age. Dr. Hasnat had a reputation of being a strict father but always had a soft spot for his grandchildren.

Dr. Hasnat retired in 1988 and went to Dhaka, Bangladesh where he lived there for 10 years. In 1998 he moved with his wife to Corona, California. He spent his time taking care of his wife, helping to raise his grandchildren and enjoyed translating into English the songs and poems of the famous Bengali poet Rabindranath Tagore. He is survived by his only daughter Raana, three sons Shoaib, Shahed and Sayeed, and their spouses, along with four grandchildren Tannaz, Farzad, Kimia and Alexa and also four sisters and one brother. His last days were spent with a smile on his face surrounded by his loved ones.